Exceptional return of the GT-CER 2020 to Jerez 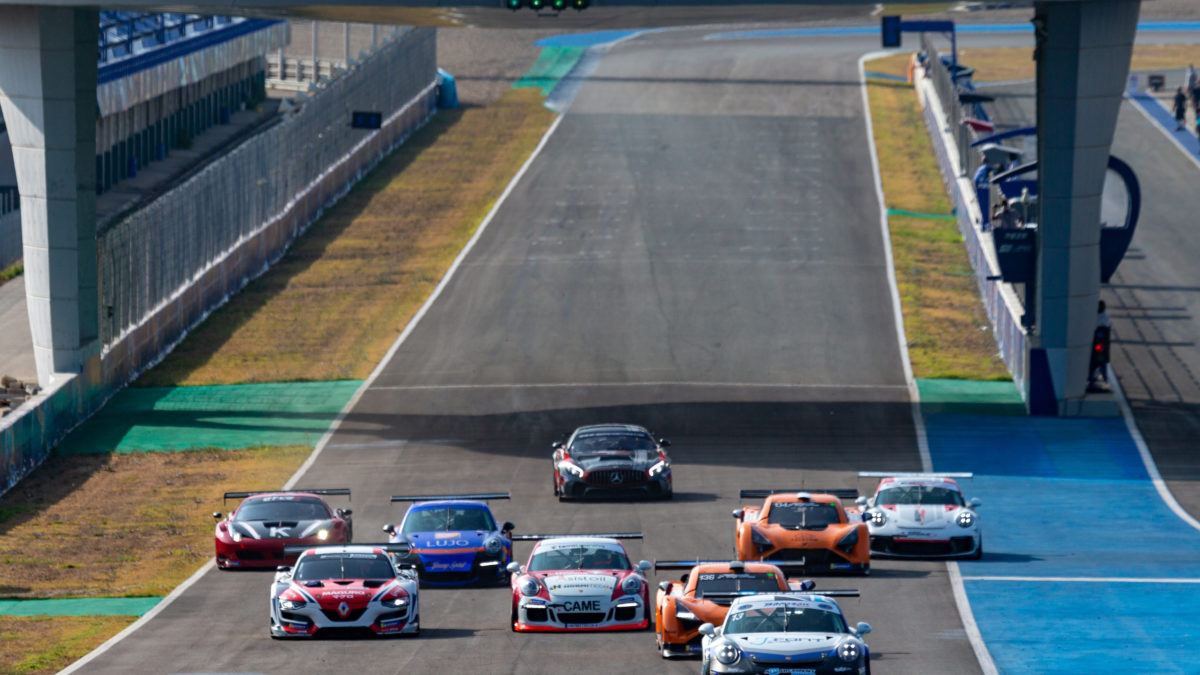 The GT-CER Spanish Endurance Championship held the third round of the 2020 season this weekend, an event that marked the halfway point of a very interesting campaign and which also meant the return of the V-Line Org championship. to the Jerez-Ángel Nieto Circuit after 5 years of absence. The weekend has seen fast-paced fights that have made the asphalt vibrate with the best Touring Cars and GTs of the moment, participants distributed in all the classes and divisions at stake. The Spanish F4 Championship was also present. The whole weekend, including the Official Test on Friday 18, was marked by very changeable weather conditions, where there were from clear skies to torrential rains that accompanied some of the races. Even so, none of this was an impediment so that the hunger for victory and the immense desire to have fun were the highlight of the meeting.

GT and TCR CER Spain: unstoppable battles
Saturday began with 4 rounds of free practice, followed in the early afternoon by a compressed Qualifying to define the starting grids and, in the late afternoon, the first real race of the meeting, that of the GT and TCR. Jurgen Smet and his Renault RS01 entered victorious who, after a spectacular demonstration of intent, crossed the finish line with a very small difference over their main rivals, the pair formed by Francesc Gutiérrez-Josep Mayola (Ferrari 458), second classified. The standard-bearer of Monlau Competición started the race from third position on the grid, but his good pace and some overtaking In Extremis to Joan Vinyes-Jaume Font (Porsche 911 991 GT3 Cup), authors of the pole and leaders of a large part of the race, they allowed him to claim the victory. Vinyes-Font were the fastest in the C2. Compared to the C3, Rafael Villanueva-Jesús de Martín, driving the beautiful Mercedes AMG GT4, took the lead over the French Gilles Cortuois-Patrick Brochier (Vortex Light).

In TCR the fights did not wait in Jerez, with precious battles that were the protagonists of this category, with Ferran Méndez being the first to cross the checkered flag, followed by the young World Cup player Mikel Azcona and his teammate Evgeni Leonov and Guillermo Aso, all of them with Cupra TCR.The second round was held on Sunday, a race that was marked by the constant changes in the classification, but that after 48 minutes plus one lap left the Catalan duo Josep Mayola-Francesc Gutiérrez as absolute winners, who surpassed by 15 seconds to Jurgen Smet and by almost 44 seconds to Joan Vinyes-Jaume Font, second and third, respectively. Font and Vinyes once again occupied the top drawer of the podium in C2, accompanied by Antonio Sainero-Javier Morcillo (Porsche 911 991 GT3 Cup) in second position and Fernando Navarrete Sr.-Fernando Naverrete Jr. (Porsche 911 991 GT3 Cup), third. New victory for Rafael Villanueva-Jesús de Martín in C3 Facing the TCR, in the second round the roles were changed, with Mikel Azcona-Evgeni Leonov who sentenced the race, leaving Ferran Méndez in second place. Third place was awarded to David Cebrián (Cupra TCR DSG), 2018 TCR champion, who was accompanied by Pedro Peña to enjoy a well-deserved return to the championship. Jerez also marked the debut in Spain of the new Cupra Mk4 of the PCR Sport team, which It was driven by José Manuel de los Milagros-Jaime Carbó, a duo that is also reunited with the championship after a year away from GT-CER. The Gibralfaro Competition team also debuted at the TCR CER Spain with Javier Sánchez-Luis Barrios, at the controls of a Cupra TCR.

Exciting Classes 1 and 2 CER
The most desired passenger cars in our country did their thing once again. Although with a smaller number of vehicles than on other occasions, Jerez was the scene of a competition show that left no one indifferent.The green light for Sunday was in charge of the first race of Classes 1 and 2 CER , with an exciting launch led by Isidro Callejas and his Peugeot 308 Cup that set an excellent pace that even his teammate Nico Abella managed to maintain, resulting in a well-deserved absolute victory. But they did not have it easy, because Álvaro Vela-Alejandro Cutillas (Peugeot 308 Cup) did not stop fighting and hot on his heels, getting a second position when crossing the finish line 8 seconds later. Further back was Juan Gómez (Opel Astra Cup). Iván Velasco-Adrián García (Peugeot RCZ) were the fastest in D3, while D4 was the closed preserve of Vicente Fernández, accompanied on the podium by the French Jeremie Lesoudier- Ludovic Lesoudier and José Luis Cejudo-Marc Cejudo, in second and third position, all of them riding Renault Clio Cup IV mounts. Juan Campos and his Renault Clio Cup III starred in the D5 over Pedro Herraiz-Javier Jiménez (Toyota Auris Cup) and Juan Campos – accompanied by the female Alba Camacho – in an Alfa Romeo 147 GTA Cup. second and last race, a race that brought the Jerez event to an end and saw Isidro Callejas-Nico Abella cross the checkered flag first. Those of Chefo Sport were in a constant fight with Gabriel Alonso-Igor Urien (Peugeot 308 Cup), who seemed to be the winners, but in the last minutes Callejas managed to overtake his teammates to take the victory. Iván Velasco-Adrián García in D3. Jeremie Lesoudier-Ludovic Lesoudier climbed to the top of the podium in D4, while Juan Campos was once again the winner of D5.After Jerez, the teams will prepare for the fourth round of the 2020 season, at the Circuit de Barcelona-Catalunya (November 14-15), an intense 2-hour race that will test the true endurance of all riders.

This site is registered on wpml.org as a development site.